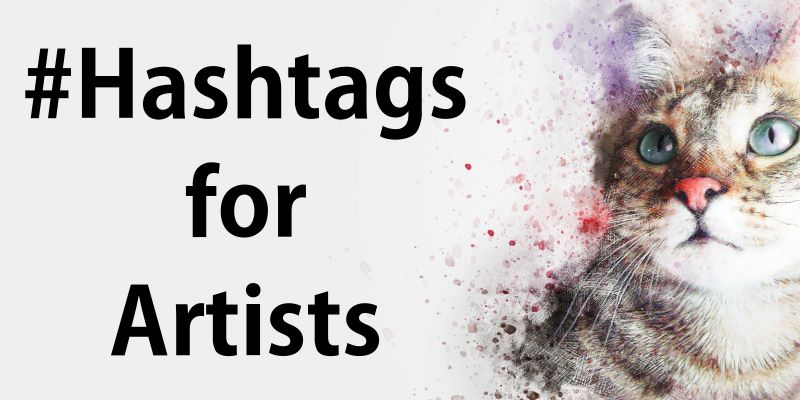 You may have heard that hashtags can help you grow your social media following and help you sell more art.

In this article you will learn what hashtags are, where to use them, how to use have them and the best ones to use as an artist.

What is a Hashtag?

You can think of a hashtag as a heading or category name which you use to classify and identify whatever your post is about.

A hashtag has a specific format so that it can be recognised as a hashtag as opposed to general text.

The first defining feature is that it starts with the # sign.

This is then followed by the tag itself. For example: #artist

A hashtag can contain several words but there can be no spaces between the # or individual words that make up the tag. For example: #oilpainting

In order to make longer hashtags more readable, you can use Initial Capital letters eg., #OilPaintingClasses

A hashtag cannot contain special characters like @ or ! or '. They can only contain letters and numbers.

It can however contained underscores which are used to replace spaces in order to separate words. For example:
#oil_painting_classes
This practice is however not recommended.

Why Do We Use Hashtags?

As a result it relies on the text you add to your posts in order to know what the photo is about.

By adding hashtags to your social media posts you help identify what your post is about.

That way people can search for a hashtag and Instagram / Twitter, etc., can show the user all the posts with that hashtag.

If you only had text in the post description, the text may not properly identify what the photo is about.

Take this photo as an example: 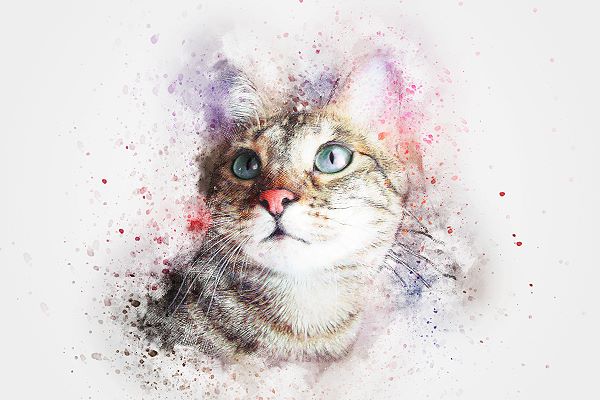 A credible caption for this photo could be:

"I am really enjoying creating in this new style!"

If you however add hashtags to the caption, then the caption becomes more meaningful to the platform's search engine. You may do something like this:

Now you will be included in the search results when somebody searches for " I love cats" or "cat art" or "#impressionistic", etc.

Which platforms use hashtags?

Nowadays pretty much every social media platform has built in support for hashtags. Some platforms however are built specifically to make full use of hashtags.

You should however use hashtags on all your social media posts as it can only help you get found.

Where Do You Put Your Hashtags?

In general you will add your hashtags into the text portion of your posts.

I personally add my hashtags after the post description. You should test adding them before vs after to see which gets you the best response.

It is important to note that each platform has its own limits and best practices when it comes to hashtags. Here are a few recommendations to guide you:

Twitter has a 280 character limit per post so only add the most relevant hashtag(s) to your tweets.

Facebook has only started recognising hashtags a few years ago. As a result of the use of hashtags is not that common. The current recommendation is to use only one or two hashtags per post.

Pinterest has no limit as to the amount of hashtags you can use, but as with Facebook, hashtags are not that common on Pinterest yet. Adding a few to the end of your pin descriptions can however do no harm so go ahead and add as many as you want.

Instagram's search feature is built around hashtags so it is crucial that you add hashtags to every one of your posts. They do however limit the amount of hashtags you can add to a post to 30. Once you start adding hashtags to your post however you will find that 30 is usually an overkill.

I recommend only adding as many hashtags as are truly relevant to your post.

Remember the idea with hashtags is to allow people to quickly drill down and find exactly what they want to see. If you have unrelated hashtags in your post and it shows up in an unrelated search as a result, the person searching is not going to look at your post anyway.

You have no not only wasted everybody's time, but the search engine will think that your post is not a good one so will start excluding it from it's search results. In other words, adding irrelevant hashtags hurts your post instead of helping it.

Tip: Adding lots of hashtags to a post caption on Instagram can quickly make it appear cluttered. As a result many Instagrammers like to add their hashtags into the first comment of their posts instead of in the caption itself.

This tactic seems to work great, but in general a search algorithm will see the caption as being more important than the comments so my recommendation is to add two or three of the most targeted hashtags into the post caption. Then add the secondary hashtags into the first comment.

As always I recommend you test the response you get when adding only a few targeted hashtags vs adding more and broader hashtags to your posts to see which gets you the best result.

Which Hashtags to Use?

There are basically 5 categories of hashtags you can use.

We have discussed this category a little already, but let's delve a little deeper.

A relevant hashtag is one that directly describes or is related to the specific post. In the cat artwork showing earlier you would use hashtags about:

The next hashtag category is popular tags. Certain hashtags trained at different times. For example you may notice that #cutecats is currently going viral. You can then add this hashtag to your post as well.

Category 3 is time specific trending hashtags. Certain hashtags are used only at specific times or on specific days. Examples of these are:

#tbt or #throwbackthursday - every Thursday artists post an old artwork using this hashtag as a means of re-showcasing good previous artworks.

#autumnart - this hashtag will trend only in the fall.

Category number four is action hashtags. These hashtags are used when you are trying to get the person searching for it to take action. Usually you will do the same action for them in return, but not always. Examples of these are:

#follow4follow - when a person sees this hashtag they know that if they follow your account, you will follow them back. That way you have both grown your accounts.

#repost - this indicates that you are sharing somebody else's content. You then use this hashtag and tag the person in order to give them credit. This person's post is then shown to your followers helping them gain more exposure. Often in response to this they will use this action hashtag:

#shoutout - when you use the shoutout hashtag you are posting to your followers but mentioning another person in order to make your followers aware of that person. This is usually in response to somebody reposting some of your content as a way of saying thank you.

The final category of hashtags are platform specific hashtags. These are very popular on Instagram. Here are a few examples for Instagram:

How to Find Popular Hashtags

Obviously hashtags that will work for my artwork may not work for your artwork as you may be working in a completely different medium or style. Being able to find the best hashtags for your art is actually quite easy when you know how.

My favourite way of finding good hashtags is by using Instagram.

As you start typing in the search box, Instagram starts suggesting relevant hashtags. The most used and relevant one being at the top.

Below the suggested hashtag it will actually show you how many posts are using that hashtag.

For example at the time of taking the screenshot below there were over 400 million posts with the tag #art. Telling you that this is a ridiculously popular hashtag. 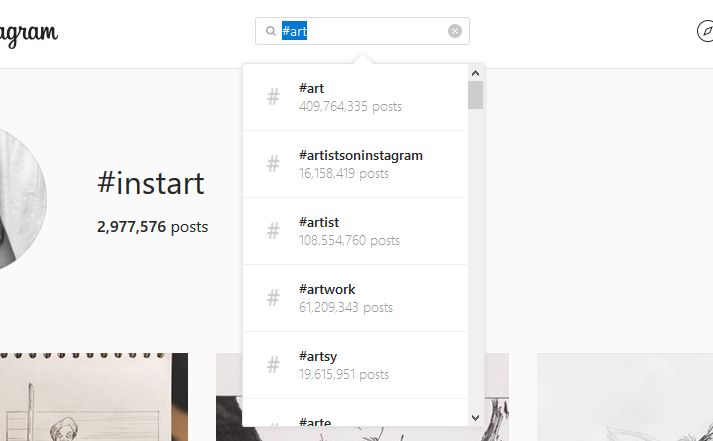 Using this hashtag would be pretty much useless as your post would be one in 400 million so it's a chance of showing up high in the search results would be as good as zero.

What you want to do is scroll down inside of the suggested hashtag box. Instagram will show you gradually less popular hashtags along with the amount of posts tagged with that hashtag.

What you want to look for are hashtags near the top of the list but ones that have a smaller number of posts using that hashtag. Ideally you will look for hashtags that have less than 1 million posts using that hashtag but more than 100 000 using the hashtag. In other words you are looking for hashtags that are popular but not overused. That way you will have a lot of people searching for the hashtag but not so many people adding content under that hashtag. Your post will then have a much better chance of ranking higher for that hashtag because there is less competition.

Write down the hashtags that are relevant to your art but have fewer posts.

Then try a different seed keyword. For example if you started with #art like we did above, you may type in #painting this time to see what other painting related hashtags Instagram suggests.

That way you can find lots of fabulously popular hashtags which have a relatively small amount of posts using that tag. This then increases the chance of your post ranking high in the search results.

Now let's take a look at some of the most popular hashtags for art.

Examples of Hashtags by Subject

Examples of Hashtags by Style

Examples of Hashtags by Place

Create Your Own Hashtags

One final tip about using hashtags is to create your own hashtag(s).

Make it unique and something that identifies you. For example #yournameartist or #artofyourname

That way people can search for you without knowing the actual address to your social media profile.

You never know with the right amount of marketing and interest, your hashtag could trend and go viral bringing you in an incredible amount of exposure in a very short time.

When creating your own hashtags just remember to keep them relevant.

Now that you know which are the best hashtags to use for your artworks, choose wisely and good luck with your social media marketing.

Stay Up To Date

We are constantly adding new tutorials and articles to the site.

Enter your name and best email address then we will keep you updated on all the new tutorials we add which will help you sell more of your art.

Thank You for choosing to stay up to date.

(Your info is 100% private and you can unsubscribe at any time.) 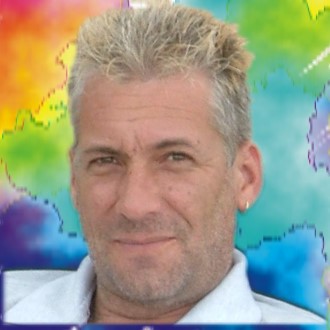 If you want to turn your hobby into cash in the pocket, then you have come to the right place. Nolan has been a full time artist for close on 20 years already and here he shares all those experiences.